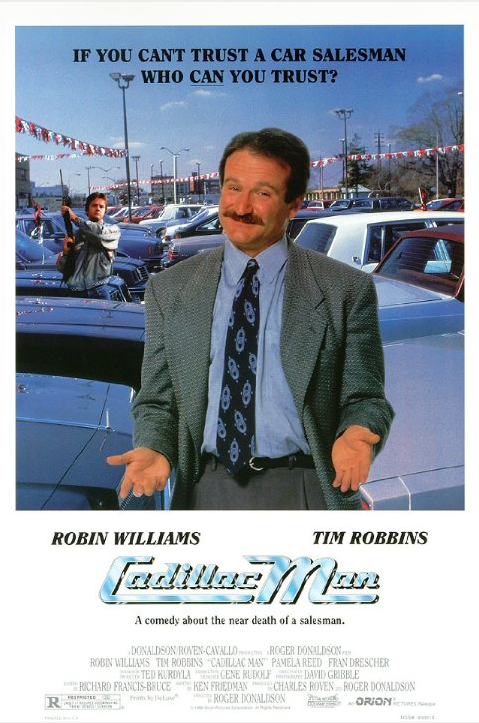 About the last–I once worked as an extra on one of his films.  It was Cadillac Man, and I was thrilled, though not because of him.  Tim Robbins was in the cast, too, as was Pamela Reed and Fran Drescher, all favorites of mine, and who I hoped to at least get a glimpse of.

It was a night shoot, and I was a face in a crowd of actors all playing nightclubbers fighting to get into a club. For most of the night, we sat around–finally, about 5am, we were called to the set (somewhere in the Manhattan West 30s) and on cue, we screamed and shrieked and pushed, all of us barely contained by the velvet rope.  I remember Lori Petty (playing some aggressive clubber trying to break the line) yelling at an actor playing a bouncer (“Don’t pull so hard–it’s called acting”) and wishing for the whole thing to be over so I could go home and sleep.

Robin was in the scene, but I couldn’t see him I was so far back. The whole thing seemed to end before it began; after a few takes we were told to hold in place for a while, and I thought, oh, they’re making sure they got the shot.  Then, quietly, loudly, came the strains of “Happy Birthday” as all the extras chimed in.  Maybe there was a cake. I knew it was for him, but a little piece of me hurt inside–my New Year was beginning too, but on that movie set there was no one to share that without looking like an ass who was trying to take away Williams’ moment of celebration.  I sang along, for him, but also to me (I reminded myself how grateful I was to have a paid gig–on one’s birthday, wasn’t that some sort of harbinger for better days?), and when they released us, I jumped on a train and spent the whole day in bed.