“Who is that?” I recalled thinking as a child when I first saw Jane White in a television version of Once Upon a Mattress.  As the imperious Queen Aggravain, her performance was a lesson in comedy and drop-dead stylishness; she was something special, and I looked forward to seeing her again.

But sightings were rare—hers was a career that played out mostly on the New York stage, a friendlier environment for a mixed race actress.  Like Julie in Showboat she was racially condemned because of the times, her career forestalled due to an egregious lack of imagination.  Imagine, as the daughter of NAACP founder Walter White, being told she had to lighten her makeup for the Aggravain role, so as not to appear too “exotic” (who did they think they were fooling?  Despite my limited experience as an eight-year, no amount of pancake could disguise a voice and bearing that screamed ‘black woman’).

White sucked it up, and did the work in America (TV guest appearances, stage dramas and musicals) and overseas, none of which was as forthcoming as she deserved.  But she pops up in one of my favorite films: in Klute she’s sensational in a one-scene role as Jane Fonda’s former madam boss, just as she was in her last Broadway outing as Solange LaFitte (a Frenchwoman!) in Stephen Sondheim’s Follies.  Beauty, talent and range—what a tragedy we didn’t see more of it.  RIP, and thanks. 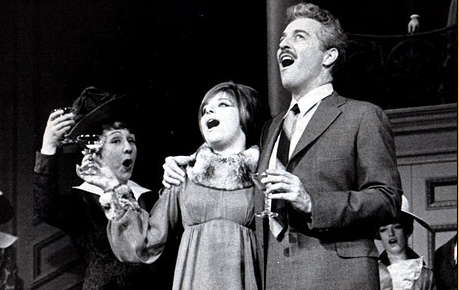