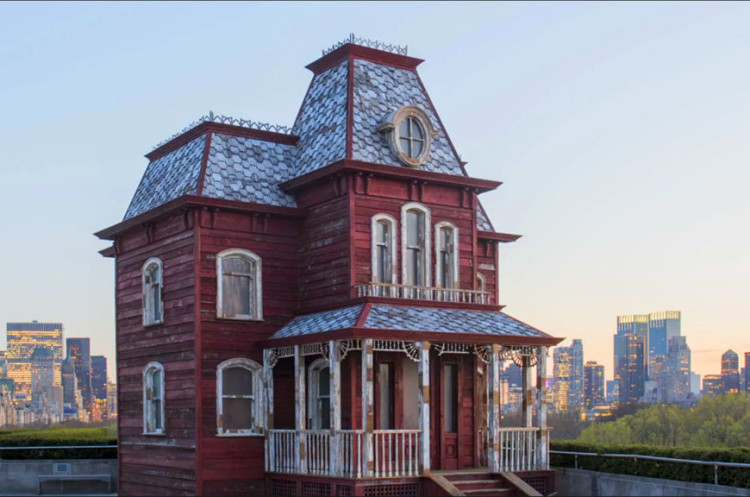 How apt that the red barn on top of the Metropolitan Museum of Art is called Transitional Object. It’s a term psychologists use to describe that which weans us away from, while providing the comfort of the original—think pacifier, though such objects might also be defined as props used to test reality. Could the same be said of a film? Through Alfred Hitchcock’s Psycho, a generation discovered decidedly adult mysteries and horrors. The artist Cornelia Parker has plopped one of its significant visual tropes-the house where Norman Bates grew up—on top of the Met’s roof. Built from the remnants of an upstate barn, it’s a bit shrunk, and we see the back of it exposed—a reference both to cinematic smoke-and-mirrors and the make-believe that defines our childhood. But many miles of subtext inform it; it’s funny to see it surrounded by selfie-taking tourists and the skyscraper/big tree backdrop. No doubt it would make quite a different impression on an overcast rainy day, but whatever the weather, it’s one of the best installations in their series. See it, and try to sidestep the nightmares.

Cornelia Parker’s Transitional Object (PsychoBarn) is on view at the Metropolitan Museum through October 31, 2016