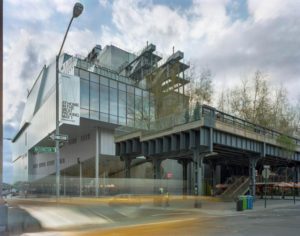 There I was sunning on an island off the tip of Long Island, as my vacation days dwindled to a precious few. Clouds rolled in. Part of me welcomed the momentary break from the rays, but another part dreaded the sun’s disappearance. I counted the minutes wondering if they would ever would.

Uncertainty. In this world nothing seems a sure thing, an idea prompted by the title of the new Whitney’s inaugural exhibit America is Hard to See. Those words have haunted me all summer in jesting, probing ways (as has the exhibit, but more on that later). Surely the events of the recent past have us all wondering what’s in store for a country like ours, one that simultaneously trumpets its freedoms and failings in ways that make the heart soar one minute, before sinking the next.

Call it our era of the Troubles, though I often wonder if the Crazies is a better name. The abstracts are always with us (unemployment, privilege, politics) but their effect on events closer to home should give all of us pause. How much more gun violence (police shootings, theater slayings, on-air broadcaster executions, random killings) must we tolerate before someone convinces the NRA to put people before guns? Yet weapons come in all forms: this summer a subway panhandler spookily mumbled something in my ear, before spitting in my face—when admonished, he was almost contrite, a sign of either madness, or something deeper, of which that man was only a reflection.

It’s personal. That’s what I thought when I found myself at Disney World this summer. A mecca for the child that resolutely lives in the adult in all of us; a lure for real children hypnotized by the animated blockbusters that are Frozen, Cars, etc., etc., Disney World is there to cater, seduce and help you part with your hard-earned cash so that you can waft through a series of fantasy worlds that rival the holodeck in Star Trek: The Next Generation. It’s an impressive show, but what to make of the kids who seem more inclined to whine, weep or tantrum loudly at the Magic Kingdom (overhead: “If I don’t leave this park soon, I’m going to lose my mind,” exclaimed one 11 or so year-old) or those grimacing adults, stung by the realization that they’ve bought a ticket to the ninth circle of hell. DW is an amazing construct, but not one designed for people with low physical stamina or scant patience for long lines (besides money, it’s the unavoidable price you pay for the rides. Be warned—there are few places to sit throughout except in restaurants). I was happy to make its acquaintance but relieved that my next visit won’t occur for least another five years (my spouse’s threat).

Art can do that, too, as is evident at the Whitney Museum’s new home in Soho. Many will carp at the building, but Renzo Piano’s one-two punch of spaciousness and views (of the Hudson and the city) will soften even those churls who believe all museums are tombs of antiquity. They’ve gone to the stacks for America is Hard to See, juxtaposing old and new friends in ways that refresh our impressions of artists we thought we knew (or had grown sick of). The “art” is undeniable: who we were, are now, and hope to be radiate poignantly in the works of Lawrence, Sheeler, Warhol, and Hopper; in the heart-pounding images of Mapplethorpe and Nan Goldin, or the sly sensuality provided by the continually under-sung Charles Demuth, Paul Cadmus and Miguel Covarrubias. Everyone is there.

In New York City the competition is stiff for museum attention (look at me, says the Metropolitan, and you should, if only for the lovely John Singer Sargent show on view until Oct 4); in a perfect world we’d have time (and the mental stamina) to indulge every venue. If it’s been awhile since you’ve made the Whitney’s acquaintance, the time to re-visit is now. Head downtown for a look at a past-present-future-America that’s as dazzling, evocative and complex as its people, and the land itself.