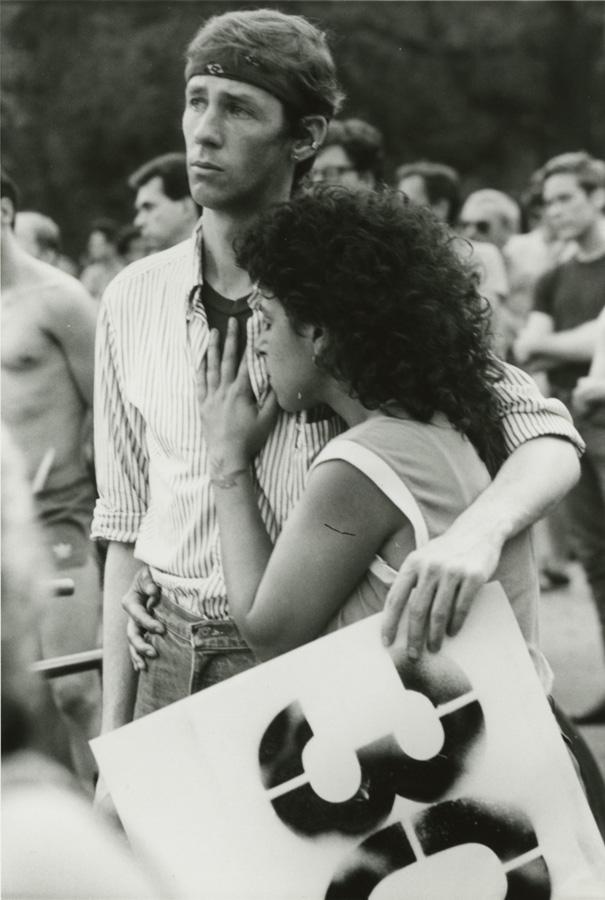 To draw comparisons between the current Broadway production of Macbeth and the New York Historical Society’s just opened exhibition AIDS in New York: The First Five Years seems a reach.  Yet after seeing both in the same week, my thoughts drift to issues of mortality, not to mention body counts.  Anyone who lived in New York from 1981 to 1985 remembers the descending gloom of a plague (allusions to Camus are scarily apt) that prematurely ended so many lives; in John Tiffany’s account of the Scottish play at the Barrymore Theater starring Alan Cumming, death befalls character after character in a classic tale of horror.  Madness ultimately claims Shakespeare’s antagonist; so too, having witnessed the carnage that swept away lovers and friends in the first years of the AIDS crisis, survivors must have experienced what felt like a waking nightmare. 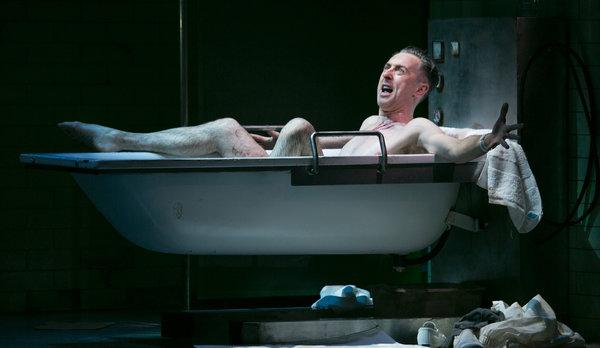 In Macbeth the decision to have Cumming play all the roles is a bold one, and when he doesn’t rush, or skirt burlesque (as he does with the female characters) he acquits himself admirably—in particular, his trademark Scottish burr lent an authentic air to the proceedings.  Ultimately, though, the stunt sacrifices storytelling; audiences unfamiliar with Shakespeare’s text could find themselves a little lost, as subtleties and characters are glossed over for economy’s sake.  The asylum setting by designer Merle Hensel is theatrical, but conceiving the source of Macbeth’s madness as post-traumatic stress disorder isn’t what the Bard had in mind.  There are no shocks; what should play as runaway tragedy feels clinical, schematic; even the blood in this production comes across as mere set decoration.   A bit of old-fashioned Hammer Studios horror would have been welcome.

Right before you enter the main gallery that houses AIDS in New York: The First Five Years, you’ll see a phone booth; visitors are encouraged to pick up the receiver and share their memories of AIDS during that period.  Placing a call to the past: recounting out loud one’s personal experience is the viewer’s prep for a walk back into one of the most disturbing periods in New York’s history.   Curator Jean Ashton has assembled some surprising artifacts: there are video snippets and documents from the city’s Municipal Archives; letters from the Mayor and journal entries from such gay luminaries as the film historian Vito Russo (he movingly chronicles his mental state as the disease lays waste to his circle of friends and colleagues); statistics and posters whose information echoes the fear of a society dealing with a deadly medical mystery.  Myriad horrors are chronicled here: the rapidity with which people succumbed; the bigotry and bad behavior fueled by fear (some of the tales feel indivisible from a village stoning); the tragic inaction of local and national government.  Yet the show also tells a tale of community, as the medical profession, the afflicted and their sympathizers rally and fight.  Tragedy and heroism were never so inextricably linked; the show is a searing reminder of the way we were, the distance we’ve traveled, and the work that still needs to be done.

Macbeth is at New York’s Barrymore Theater through July 14, 2013; AIDS In New York: The First Five Years is on view at the New York Historical Society through September 15, 2013