A Wonder World of Saints 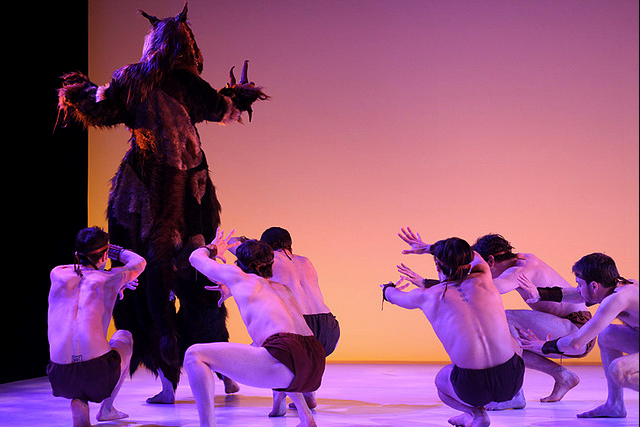 It’s hard not to be impressed by Christopher Williams, or The Golden Legend, his new work that premiered at Dance Theater Workshop this spring.  And grateful—we’ve all bemoaned those evenings of dance that lack ambition, or at least a stroke of boldness or risk.  Arriving on the heels of another exploration of divine passion (his 2005 Ursula and the 11,000 Virgins at P.S. 122), Legend plunges us deeper into the realm of Christian signs and wonders filtered through a distinctly gay male gaze.  It also signals the ascendancy of a choreographer whose work some have called visionary, a nod to his choice of subjects and to his total command of stagecraft.

This subject is well timed.  History has shown that in moments of crisis (war, economic uncertainty) people cling to the order religion provides.  Unfortunately the negative effects of piety are everywhere: for each good Christian, there’s his evil twin using Biblical tenants to foster superstition, divisiveness and discrimination in the name of God.  Our country’s morality wars are in full swing again, and as suicide bombers on the other side of the world lay siege in the name of Allah, there seems no better time to probe how ancient iconic myths fuel misguided martyrdom, or our current beliefs.

Such resonances suffuse The Golden Legend. Its source, the 13th century work The Golden Legend of the Saints by Jacobus de Voragine is one of the most ubiquitous works of its time—according to program notes, between 1470 and 1530 it was the most often printed book in Europe other than the Bible.  People were attracted to its elaborate account of the origins of Christ; later, it served as a major reference for those iconic depictions of saints in late Medieval church art.

In Legend’s stunning opener the saints march down the DTW aisles in a slow, grand processional that appear to lack only the swinging of an incense pot.  What follows is a brief promenade that allows us to behold them in full regalia before we watch each saint’s story play out on a set rimmed with thrones on which each saints takes a place after his vignette.

Williams’ hand is everywhere, from the set and costumes to the excellent instances of puppetry that filigree this exploration of saints in startling ways.  It’s a gift to walk into a dance space and feel the mood of the piece so palpably before anyone executes a single step.  And what a pleasure to have live music: Legend has a full complement of instrumentalists and a group of pit singers adept at everything from Anglican chants to the kind of wordless song parlayed by countless new music vocal ensembles.

Unless you were raised Catholic or majored in religious studies, the program notes are thorough and necessary.  Williams doesn’t copy his source slavishly, which allows him the luxury of loose interpretation and visual inventiveness.  He deploys a full arsenal of Kabuki and Noh, or what some might cynically peg as Julie Taymorisms—bright ribbons spill out of mouths and wounds; tiny dolls are yanked from orifices; prosthetic tongues protrude; faces and bodies are chalked and painted.  The last is particularly notable for the way the director acknowledged its impracticality: the grapplings of St. George (played with a rock star’s panache by a rakish Glen Rumsey) and his dragon (Dylan Crossman) left streaks of reptile green on the white tarp. In the pause that followed, scurrying wraiths alighted on the stage to clean up the mess, scary monsters imbibing the offal to entertaining effect.

There was much to savor.  But at three-plus hours, you began to yearn for a break in the repetitive structure, wondering if it could have done with fewer saints.  Might there have been less movement repetition?  As yet another vignette began with the dancer’s back to us, his legs lunged, the evening takes on a sameness; the marvelous balances, the quick stomping chorus and the bound hands are gorgeously executed, but soon the mind hungers for an unexpected flash of ingenuity that never comes.  Silently, subconsciously, you began a countdown as the seats filled with saints (“four to go…”); the embarrassment of riches began to wear.

None of this is meant to diminish the stunning performances.  Williams has assembled a cast of stars: the great Gus Solomons shows up as Saint Dionysis, balancing his head in his hands in a comically macabre interlude.  Full of sensual inscrutability, Jonah Bokaer made an arresting St. Sebastian; this episode had a particular immediacy, both in its movement and in its use of spoken word—at one point, the male chorus groped themselves hungrily assessing Sebastian, as their guttural yelps turned to whispered chants of “queer” and “faggot—that conveyed a dangerously tensile homophobia.   The feline Aaron Mattocks was Saint James as Matthew Barney might have imagined him in elfin leggings, his eyes and mouth rimmed with red.  Here, the choreography reached its apotheosis as Saint James is born aloft on the legs of the female chorus, only to be enshrouded by them (legend has it that when he was laid on a stone at his pilgrimage site, it softened like wax, forming a sarcophagus around his body) in an ingenious choreographic stroke.  And I could have watched the marvelous Charley Scott for hours—he sustained the Saint Francis of Assisi segment by infusing movement with powerful acting (which, by the way, was impressive throughout) to create a heartbreaking portrait of the stigmatic “patron of all creatures great and small.”

The evening also boasts performances by John Kelly, David Parker, Keith Sabado, Nicky Paraiso and especially the provocatively scornful (he performs his segment nude) St. Laurence of Luke Miller who at one point turned and exposed his anus to the audience, an emphatically sexual reading of Laurence’s address to his tormenters: “Thou cursed wretch, thou hast roasted that one side, turn that other, and eat!”  That Christopher Williams managed to enlist such ultras in the service of such risk-taking would be praise enough, but believe me, the vision and the artist more than warrant it.  His is a talent to watch.