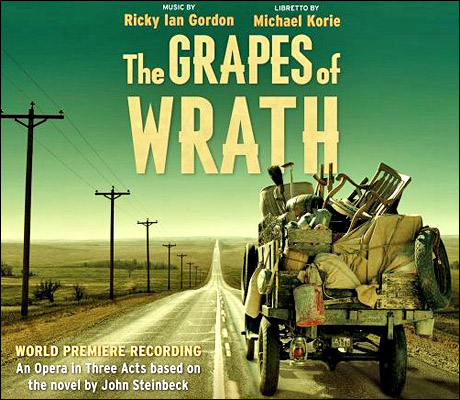 Like the weather, the gloomy words of literature threaten to upend.  I’ve been reading Christopher Isherwood’s A Meeting by the River; last night I got to the part where one of the characters commits a heinous act.  I was so mad at him I almost threw the book across the room.

Abetted by Wendall K. Harrington’s magnificent projections (they worked despite the tendency of Carnegie’s gilded crown moldings to bled through) the gorgeous Western skies gave way to a somber black and white world composed of shots by Dorothea Lange, Walker Evans and others.  Their faces of forgotten men, women and children loomed over the multitudes crowding the Carnegie Hall Stage: the American Symphony Orchestra conducted by Ted Sperling; the massive Collegiate Chorale; a masterful cast of singers culled from the world of opera and the musical theater: Victoria Clark, Nathan Gunn, Elizabeth Futral and the rest combined to bring us an opera infused with the heart and sound of Americana.  Suggestions of the elegiac Copeland and Barber wafted around the edges alongside the chugging, jazzy rhythms of Guthrie and Warren (that’s Harry) until what emerged was music that was wholly original, full of passion, grit and soul.

As a grace note, Jane Fonda narrated the evening.  Her father Henry played Tom Joad in John Ford’s splendid film adaption, and watching her, I was reminded of something Lee Strasberg said to her when asked why she was accepted into the Actor’s Studio: “I took you because there was such panic in the eyes.”  Monday night those eyes spoke eloquently for all the Joads—the ones whose time passed in the hot, maligning California orchards, and the ones who live today.  They are the homeless, the foreclosed, the struggling victims of a nose-dive economy who endure in the richest country in the world.   I doubt the irony of that statement was lost on Steinbeck’s people; it certainly haunted my dreams, when I was finally able to sleep.    No doubt The Grapes of Wrath is a story for our times, but for a change, wouldn’t it be nice if the story, and the times, foretold a tale of optimism instead of woe?